From FountainPen
(Redirected from Platignum)
Jump to navigation Jump to search
This page is a translated version of the page Platignum and the translation is 100% complete. 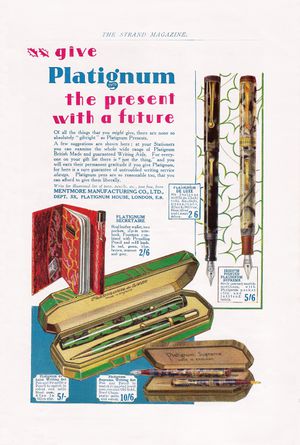 Around 1925 Mentmore introduced the Platignum brand for its lower-end pens production. At that time it seems there was some sort of reorganization of the company and that the intention was to use the Platinum name, but this was not registrable as a trademark since it's the name of a metal. Therefore, the name was slightly changed and the Platignum Pen Company (it is not clear how much independent from the parent one) was specifically created, and it began directly marketing Platignum branded pens, focusing on the low-end production compared to pens distributed by the main brand.

According to the company website in 1925 with the birth of Platignum there would be the creation of a replaceable group nib, which could therefore be considered as an antecedent of the Eversharp Personal Point system, and of the various similar systems adopted later by other companies (such as Bayard, Esterbrook and Pelikan). Also on the company's website proclaims that the Platignum was the first company to have used, in 1925 itself, plastic injection molding for the production of their pens and have introduced stainless steel nibs with the slogan "As good as gold".

For some time the two brands were produced together, the Mentmore was transformed into a joint stock company in 1930. It is not clear the situation at that time, there are those who reported that the Mentmore brand has been progressively replaced by Platignum, but by the late '30s to the '50s, there is still a large production of pens with this brand. Association with Mentmore is established at least until 1957.[1]

During the war the pens production was reduced to meet the needs of the war effort. It is reported that the company produced pens for spies with maps and compasses or with poisonous darts. The production resumed after the war also with the creation of ballpoint pens. The evolution of the brand is uncertain as well as relations with the parent company. And today both Mentmore and Platignum exist as independent brands.