From FountainPen
(Redirected from Bayard)
Jump to navigation Jump to search
This page is a translated version of the page Bayard and the translation is 100% complete.

Bayard is a major historic French fountain pen brand; the company was founded in 1922 and has continued operations until the '60s when, as most historical producers, was taken down by the revolution of the ballpoint pen.

Bayard fountain pens were characterized by good overall quality, certainly in par with the one of the American producers, even though the company was never reported for specific innovative technical contributions, the validity of its products has ensured the success and is still valued by collectors. 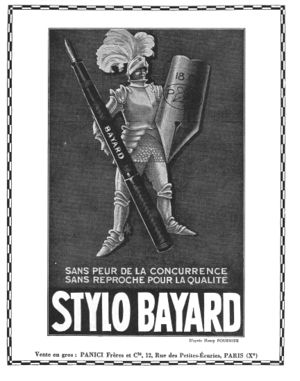 The company officially took the name Bayard only in 1932, when the Panic Frères & Co. was renamed in Stylo Bayard. The company had its origins in the late years of 1800, starting from the activities of a Parisian bookseller, Etienne Forbin, who in 1903 took the reselling rights of various American writing instruments producers. In 1912 he registered the trademark Bayard. In 1922 the Forbin grandchildrens resumed the work of their grandfather founding the Société Panic Frères and started a fountain pens production. But for marketing reasons, they used as trademark the name of the medieval knight Pierre Terrail de Bayard, that was an hero of the wars in the medieval Italy, considered as the image of the knight without fear and without blemish.

The initial models were the classic pens in chased or mottled hard rubber, made in cylindrical shapes with the classical eyedropper or safety filling system. There were also luxury models with gold or silver overlays. The pens were advertised using the figure of a knight who had a nib as a shield and a pen as a spear; the advertising claimed that the Bayard pens did not feared competition or remarks on their quality. The nibs of these first models were marked with the symbol PF (standing for Panici Frères) except for the top models that had the nib marked with the word "Bayard", which otherwise was normally reported on the pen body.

In 1927 were first introduced lever filler models, that in 1930 were divided into two series, the Normal and the De Luxe. In the late '20s the company began to produce their firsts celluloid models, and launched the 446 series, in jade, ruby and lapislazuli, with a special removable back that could be replaced to use the pen on a pen-holders table.

In 1932 production was reorganized, the company changed location and name[1] from "MM. Panici Frères" in rue de Petits-Ecuries 12 to "Stylo Bayard" in rue des Cordelières 31. At the end of 1931 the Superluxe top model had been introduced, a lever filler with gold nib, produced in coloured material (not flammable, therefore probably galalith), in the colours black, iridescent marbled gold and iridescent marbled green. The new pens had streamlined forms, with the ends of cap and body of conical shape, and were produced both men and woman models.

In 1932 a cheap model was launched, the Special 8; it was a lever filler (but also a safety was available), in black or marbled hard rubber with an metal alloy nib (but it appears also with gold nib), still in flat-top style but with an octagonal cap head. Then was introduced also the series Luxe, a mid-range pen compared to the Superluxe, also a lever filler, with gold nib, and produced in different colours and slightly tapered shapes, with truncated cone ends for cap and body in the style of the Superluxe, but with simpler finishing.

The next year another models reorganization was made, the Special 8 and Luxe were provided with a sword-shaped clip inserted laterally in the cap; as a consequence of this on the economy line Special 8 the octagonal cap head was removed, and it became an ordinary flat-top. Finally the 'Superluxe Grosse Containance was introduced, a model of larger size and ink capacity, decorated with a Patrician style band on the cap instead of the two rings.

Around 1935[2] also the pair of rings of the ordinary Superluxe were replaced by a new band decorated with a different pattern, adopted by the whole series; at the same time the clip was also modified assuming a tie/spear shape and losing the Bayard imprint. In 1937 the Luxe series was replaced by the Special Luxe, made of marbled celluloid in marbled colours, and also equipped with a decorated band on the cap. At the end of 1938,[3] following the trend introduced by the Vacumatic, Bayard introduced a new model equipped with transparent barrel to stem the ink level vision, called Niveauclair. 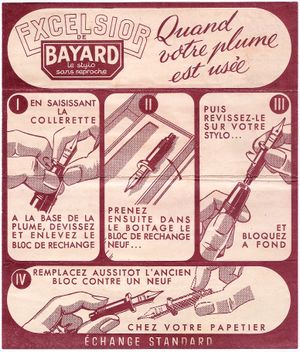 Instruction for the Excelsior model

In that same period[4] the Le 4 de Bayard, a new economic line cheaper than the Special 8, was introduced and also two other flagship sub-brands were used directed towards two different market segments: the Excelsior brand for the second tier of medium quality pen production, and the Alpin brand used for cheaper pens produced for the lower end of the market, mainly students and schoolchildren.

In 1940 there was a restyling of the Superluxe line going towards a more streamlined cap but maintaining the conical ends of the pen and the new Superstyl was introduced, still a lever filler, in two versions, for men and women. The Superstyl had three rings on the cap and a spear-shaped clip with a double "V" pattern; it was made of celluloid produced in many colors, and equipped with a gold nib. 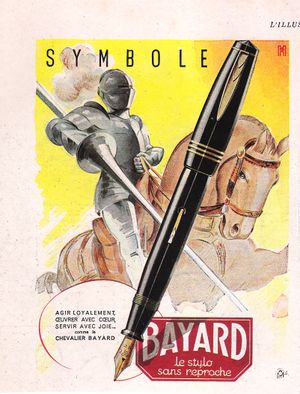 The Second World War period was critical, as the use of gold was forbidden in many European country, and the celluloid supply began to run low. The company still tried to maintain high quality, while using steel nibs. Around 1943 was introduced the Excelsior model; it was very similar to the Superstyl, but with a steel nib branded with the Excelsior name. The innovative feature of this pen was that the whole nib block was interchangeable, since the steel nibs were subject to greater wear, and the pen was sold with a spare The model was successful, and despite the restrictions had disappeared after the war, it remained in production until 1948.

Around 1946 the different model lines, the Le 4, the Special 8, the Special Luxe and the Superstyl underwent a restyling following the overseas trends, the latter two with completely ogival lines and new shapes for the clip. In 1949 a further variant of the Superstyl model was also introduced, with a metal cap. In the same year the company launched some other models: the Super Bayard as a new top model, the Capostyl with hooded nib. All of them were button filler.

In the early 50's the stylistic lines were uniformed and the various series took a similar form. All models moved to a fully streamlined shape losing the tapered conical ends. In this same period other models were launched as the Bayard 2000 and a new version of the Niveauclair, with this one other pump filler models were produced like the Excelsior 507, and also some accordion filler model (the Stylomine patent was expired) like the Fit.

During the '50s the company the company suffered a continuous decline in sales caused by the growing market share of the ballpoint pen. It sought the relaunch in in 1956 with the Souverain model, a streamlined hooded nib pen with accordion filler, produced also later with a metal cap as Souverain de Luxe. But at the time the writing instruments market was dominated by ballpoint pens; smaller models were introduced, such as the Dauphin, the Bayard 20, the Bayard 30 and the Karting, a cartridge filler pen, but the decline continued inexorably until the final closure November 5, 1973.[5]